U.S. Route 9 (US 9) is a part of the U.S. Highway System that runs from Laurel, Delaware, to Champlain, New York. In New York, US 9 extends 324.72 miles (522.59 km) from the George Washington Bridge in Manhattan to an interchange with Interstate 87 (I-87) just south of the Canada–United States border in the town of Champlain. US 9 is the longest north–south U.S. Highway in New York; additionally, the portion of US 9 in New York accounts for more than half of the highway's total length.

The highway's passage through the state offers a diverse sample of New York to a traveler, passing through busy urban neighborhoods, suburban strips, and forested wilderness. It is Broadway in Upper Manhattan, the Bronx and much of Westchester County,[3] and uses parts of the old Albany Post Road in the Hudson Valley, where it passes the historic homes of a U.S. President(Franklin Delano Roosevelt) and Gilded Age heir.[4] It passes the center of New York political power in downtown Albany,[5] and the patrician grandeur of Saratoga Springs.[6] It penetrates into the deep recesses of the Adirondack Park and runs along the shore of Lake Champlain,[7] where it is part of the All-American Road known as the Lakes to Locks Passage.[8]

US 9 spawns more letter-suffixed state highways than any other route in New York, including the longest, 143-mile (230 km) New York State Route 9N (NY 9N).[9] Outside of the cities it passes through, it is a mostly a two-lane road, save for two expresswaysegments in the mid-Hudson region. For much of its southern half it follows the Hudson River closely; in the north it tracks I-87 (the Adirondack Northway).

North of Poughkeepsie, 9 is at first a busy four-lane undivided route, with occasional turn lanes as it approaches Hyde Park, passing Marist College, the main campus of the Culinary Institute of America and then the home and presidential library of native Franklin D. Roosevelt. It narrows to two lanes at the built-up area that marks the center of town, then opens up a turn lane for traffic entering the third of the town's tourist attractions, Vanderbilt Mansion National Historic Site.[10]

Past Hyde Park, the road narrows to two lanes again as traffic becomes more local. The area recalls Westchester County with many wooded tracts and stone walls at roadside. Through here it has been running fairly close to the river, but after Staatsburg the highway begins to veer inland again. The land to the west, between road and river, forms the Hudson River Historic District, the largest in the country and another National Historic Landmark. Route 9 is at least 2 miles (3 km) east of the river when it reaches Rhinebeck, the next town along the route, where NY 308 heads off to the east,[10] and close to the Old Rhinebeck Aerodrome aviation museum.

At Weys Corners, the X-shaped intersection north of Rhinebeck, northbound traffic to the river and the Kingston–Rhinecliff Bridge via NY 199 typically bears left onto NY 9G. Southbound traffic, in turn, takes 199 itself to the river when the two meet in Red Hook 3 miles (5 km) further ahead. Two blocks north of that junction are the Village Diner, originally named the Halfway Diner since it was roughly halfway along Route 9 from New York City to Albany, and the Elmendorph Inn, a mid-18th century counterpart to the diner. North of Red Hook, the land around the road begins to open up into farms and fields, offering frequent views of the Catskill Escarpment across the river. This terrain continues into Columbia County, which 9 enters 5 miles (8 km) beyond Red Hook.[10]

Bucolic Hudson Valley landscape along US 9 in Dutchess County

The road remains two lanes, with mostly local traffic and no stop signs or traffic lights, until the oblique four-way intersection in Bell Pond, 10 miles (16 km) into the county. Here, NY 23 joins 9 as it heads west, which in turn joins NY 9H on the northern roadway while NY 82 departs to the southeast. 1.5 miles (2.4 km) west, in Greenport, 9 turns northward again toward Hudson, the county seat, passing the St. Lawrence-owned cement plant whose expansion was recently blocked by community activists after seven contentious years.[10][22] 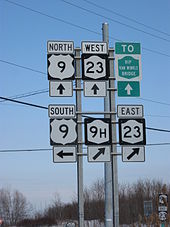 On the east fringe of Hudson's historic downtown, US 9 intersects the northern terminus of NY 9G and NY 23B. Route 23B runs concurrent with 9 for a short distance eastward before splitting at Fairview Avenue, which US 9 follows out of Hudson. A commercial strip with turn lane gives way after 1.75 miles (2.82 km) to the lightly traveled rural two-lane 9 north of Hudson. Near Stockport, Route 9 meets the southern terminus of NY 9J. Farther north, after passing through Kinderhook, home of another U.S. president, Martin Van Buren, the road passes under NY 9H at a grade-separated interchange before intersecting the northern terminus of 9H a short distance later outside Valatie.[10]When a developer wanted to add a fifth leg to this intersection for a new shopping center, the state Department of Transportation required the developer to convert the signalized intersection to a roundabout, despite heavy local opposition.[23]

The highway widens to four lanes with a turn lane shortly after crossing into Renesslaer County, and will remain so for most of the rest of the way to Albany, despite limited development and low traffic in some areas. Within a mile of the county line it passes under the New York State Thruway Berkshire Connector and meets the lone section of I-90in New York not part of the Thruway system, at exit 12 southeast of Castleton-on-Hudson. 4 miles (6 km) north of I-90 and 4 miles (6 km) northwest of Nassau, Route 9 veers left to merge with US 20 in Schodack Center, and together they progress northwest toward Albany. Less than 0.5 miles (0.8 km) from the eastern terminus of the overlap, 9 and 20 intersect NY 150 before connecting to I-90 at exit 11.[10]

As the roadway heads westward, it meets the western (southern for state purposes) terminus of US 4 across from a Hannaford supermarket along the busy commercial strip in East Greenbush. Shortly afterwards the first sign of the state capital, the Erastus Corning Tower, starts becoming visible. At a bluff east of the river, the entire Albany skyline comes into view as the road descends, passing the northern terminus of NY 9J south of Rensselaer. Routes 9 and 20 then cross the Hudson River via the Dunn Memorial Bridge into Albany as Corning Tower and the other buildings of Empire State Plaza loom ahead, and the two routes separate, with 20 heading west across the city.[10]